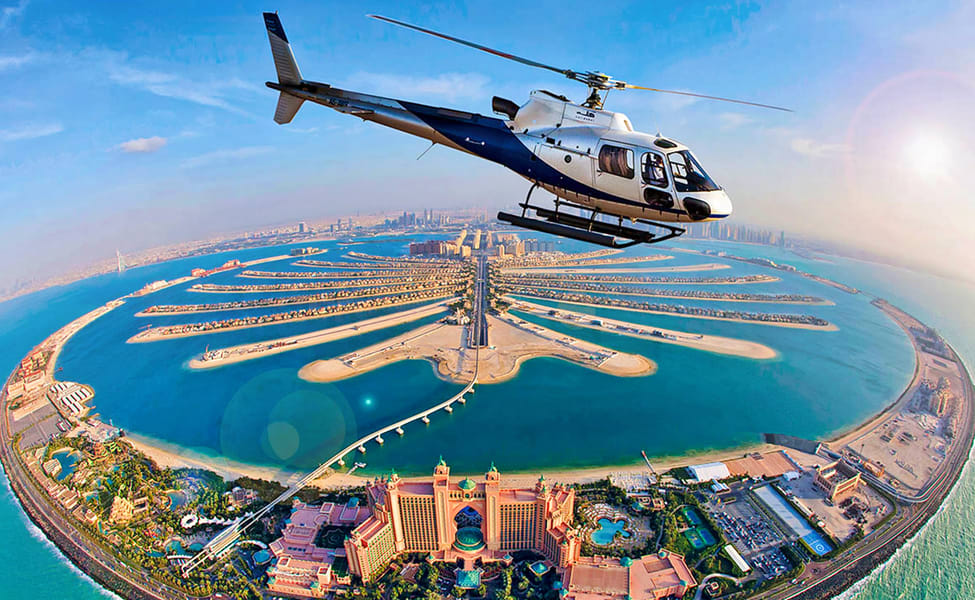 Helicopter Ride In Dubai Overview The stylish way to fly.

Dubai is the bearer of one of the most iconic skylines and is one of the best places to visit in the world. If you think you have seen and explored Dubai, try this tour for an entirely different experience from the skies.

This 12-minutes, 17-minutes, and 22-minutes of a helicopter tour of Dubai will bring you very close to all the central elements behind the grandeur of Dubai. The tour begins at the Dubai Police Academy Helipad and takes you through some of the most iconic and historical places of Dubai.

- Depart from the HeliDubai Jumeirah Heliport and experience mesmerizing sites of the Palm Jumeirah and Burj Al Arab’s iconic structure. - As your aerial tour continues, fly above the astonishing Dubai beaches. - Be amazed by the spellbinding views of the architectural masterpiece of Burj Khalifa - the tallest building in the world, the Dubai Canal, and other artistically built skyscrapers at the Business Bay. - Return towards Heli Dubai Helipad with unforgettable memories of Dubai.

- See Dubai’s iconic landmarks on air, depart from the HeliDubai Jumeirah Heliport and witness the beauty of the Palm Jumeirah, the Burj Al Arab, and the World Islands. - Get a closer look at some of the record holder structures- like the highest hotel JW Marriot Hotel, Emirates Towers, and the Burj Khalifa. - As the tour continues, be amazed by the breathtaking sights of the Jumeirah coastline, the famous Port Rashid and be awed with the biggest flag of the UAE.

- Explore the City of Vision and experience an exciting helicopter tour taking off from the Helidubai Jumeirah Heliport. - Fly over the breathtaking world wonders – The Palm Jumeirah, The Atlantis hotel & The World Islands. - As the aerial sightseeing gaze continues at the famous Dubai shorelines and beaches, be amazed at the stunning Burj Al Arab – the only 7-star hotel and Burj Khalida the tallest building in the world. - Get to see from the air the Old Dubai, where the Heritage Wind Towers, The Old Souk, and the Dubai Creek are historically situated.

Please fill the form to confirm your booking in this Tour